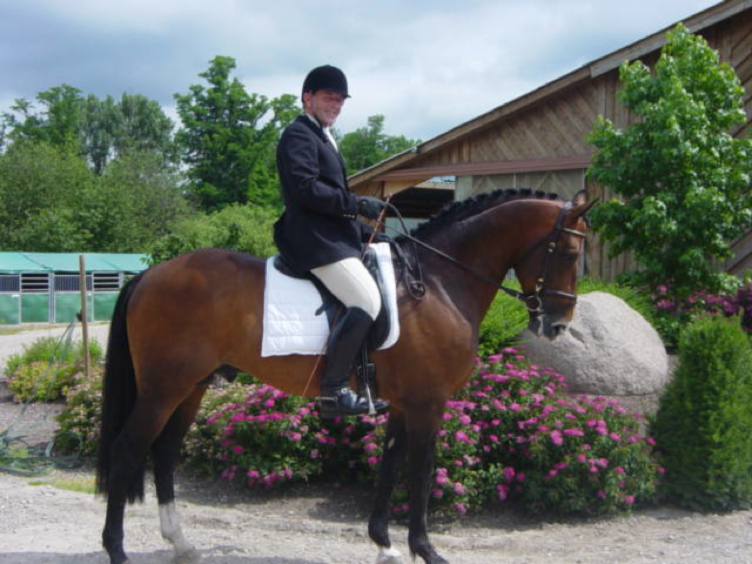 M.J.Fine Art is a Grade One Registered Irish Sports Horse. He is also registered with Weatherbys N.T.R.

He was the youngest stallion ever to appear on the British Horse Database Top 10 Living Young Sires By Own Winnings. Within six months of starting to compete he had amassed 165 dressage points.

Whilst still competing  with Jane at Prix St. Georges and Intermediare 1, Fine Art and Alan Clements (a  Para Grade 1V rider) became National Champions and successfully competed Internationally. Such is this horses temperament.

Fine Art has been competing at Intermediare 11 and Grand Prix for the last few seasons with wins and good placings in both. He is classed as Elite with the National Equine Database, having amassed over 500 dressage points.

Fine Art is the only Irish Sports Horse stallion in Great Britain and Ireland (and quite possibly Europe) competing successfully at Grand Prix.

Fine Art is a real Irish Sports horse with no warmblood in his pedigree.

He passes his amazing temperament and movement on to his offspring.

This website uses cookies to improve your experience while you navigate through the website. Out of these, the cookies that are categorized as necessary are stored on your browser as they are essential for the working of basic functionalities of the website. We also use third-party cookies that help us analyze and understand how you use this website. These cookies will be stored in your browser only with your consent. You also have the option to opt-out of these cookies. But opting out of some of these cookies may affect your browsing experience.
Necessary Always Enabled
Necessary cookies are absolutely essential for the website to function properly. This category only includes cookies that ensures basic functionalities and security features of the website. These cookies do not store any personal information.
Non-necessary
Any cookies that may not be particularly necessary for the website to function and is used specifically to collect user personal data via analytics, ads, other embedded contents are termed as non-necessary cookies. It is mandatory to procure user consent prior to running these cookies on your website.
SAVE & ACCEPT